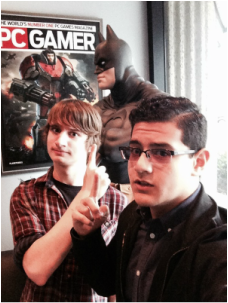 For my tenth grade year I decided to go back to Sony Online Entertainment, which is now reborn as Daybreak Games. Similar to last year the studio was half empty due to the impeding memorial day weekend and I as accompanied with my peers John McCormick, Nathan Bogdan and, a new addition, Thomas Rada. Due to the lack of personnel my contact Jeff Bolaris, the lead programmer, had a lot of work on his plate so he gave us another quick tour and gave us to the another programmer named Melton. With Melton we spoke about how he came to discover is want to be in the industry, how he chose to be a programmer and asked us the same questions. Melton's main job is being in "quality control" for many of the MMO (Massive Multiplayer Online) games Daybreak has. His quality control being capping off servers to avoid crashes, booting disrespectful players and making sure no on is cheating by hacking into the game. He does this by keeping a close eyes at all running servers and using a program he created that simplifies his process of booting players. After explaining his main job he also explained how we might be able to learn a little programming and how the importance of a game engine in creating games, both amateur and professional. After explaining this, my peers and I asked about his education and preparation for his job in which he responded "I just played as many games as I could and took programming classes in college." After this he explained how to begin learning programming and that as soon as we can we should start making stories and designs for games that we can develop in the future.

After we spoke to Melton, Jeff introduced us to the Everquest development team. First was Holly, the executive producer of the game (She is basically in charge of everything that they create for EQ). After a short Q&A with her regarding storytelling and handling logistical or technical problems she explained the process of creating expansions for a game like EQ, which has been around for sixteen years. After this we asked her what skills had prepared her for this job, she simply answered by saying that having her previous jobs in the office (artist, writer, programmer and others) had prepared her as much as anything can to be able to do what she does. After we talked she took us to meet the writers, landscape artist, map and environment designers and animators. This is what took the most time as they showed us what they were working on and explained what they do in their specific post and how all other people on the dev team work together and constantly collaborate to create the best product possible. From the passion in their eyes to the energy they showed while being able to share it, it became more than clear just how much all of these people loved their jobs and fully enjoyed every moment of it. Seeing this only furthered my eagerness and reminded why I want to become a game developer.

After speaking to the Everquest development team, Jeff took us around the studio for the final twenty-or-so minutes showing us the streaming room, the server room and, of course, the swag cabinets. After thanking Jeff and his co-workers for an unforgettable day, he took us to the break room where we found a plethora of donuts that we were generously allowed to eat. On the way out we asked Jeff the final two interview questions:
Q: "What are the most important practices to consider yourself a dedicated and responsible professional?"
A: "Just show up and work your ass off everyday. Thats all we really want and should do."
Q: "Since this is clearly not a typical day, what does one look like?"
A: "Almost the same. Just with more people, noise and fun"
Finally we thanked Jeff once more and left one amazing and memorable day. 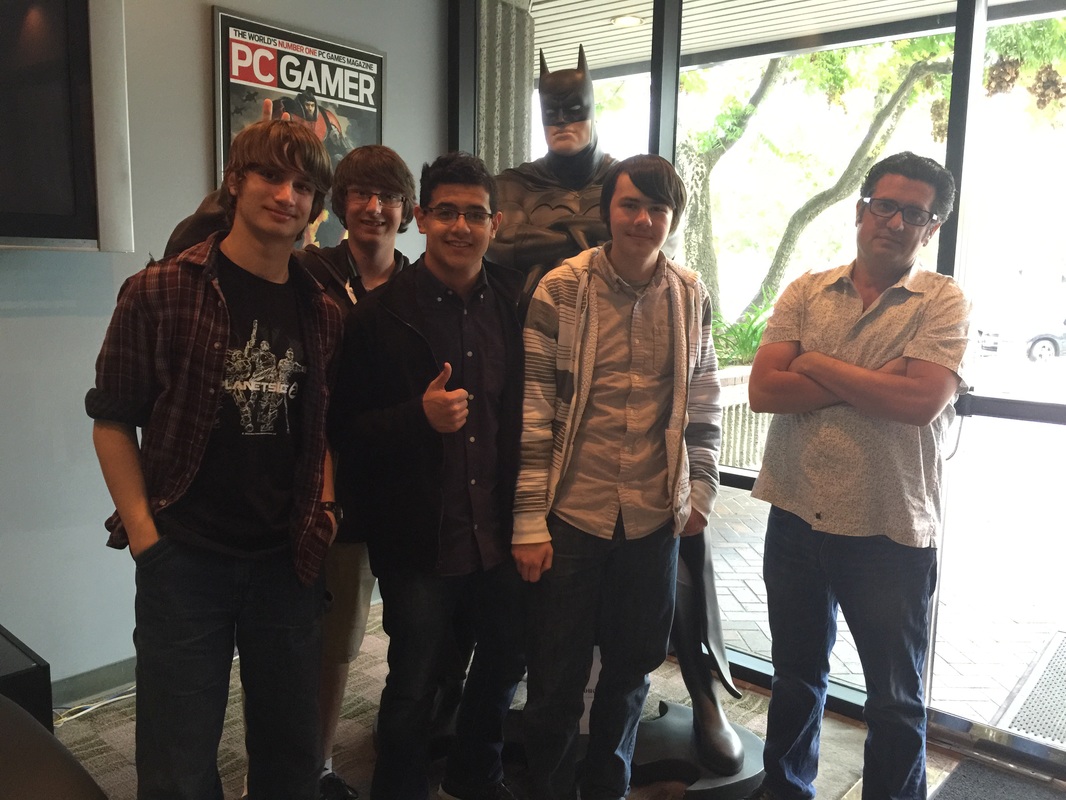 From Right to Left: Jeff Bolaris, Thomas Rada, Me, Nathan Bogdan and John McCormick
Powered by