Menu
Feel free to contact me
As one our first project in art we wanted to create something where we would learn a new technique that would help us in the coming projects but would still allow us to create something new and different. To do this we learned a technique of trancing that includes tracing two images together to create a new unique image. We did this in preparation to make a similar art piece that we could use as "propaganda" in an upcoming project. We will do this by applying the techniques we learned from this and using that to put together two "ordinary" images in a way that can convey a message we want to send in a very persuasive way.

We started this by finding two images we thought would go well together (and that we were able to use due to copyright from the artist). To do this I researched multiple various combinations such as a lightsaber with a key blade or a guitar millennium falcon, I decided top combine something that would be more difficult to color match. I ultimately went with two different designs to chose from. Those two designs were put together and I used peer critique to decide which design I would finally make. These two designs were a flower with flame coming from its stigma and a person using a spray paint can that shot lightning. After getting opinions from multiple people the lighting spray can won.

After I finally decided I went on to actually making my product. I first started by using the tracing paper we used to combine the images by re-tracing over them with pen to create visible grooves on the canvas that I could use as the "skeleton" of the painting. After I did this I began painting the canvas with water color. In my first draft the painting is very simple, as in I used very bold lines with a lot of paint and basically just "colored in the lines". Following the straight copy of the image was interesting because while the lighting looked good the hand and can were too "unrealistic". The can didn't have any shadows or curves and edges and the hand was very big, pale and lacked a lot of detail. When I approached my peers and teacher some of the critique I took into mind when creating my second draft was add more dimension to the drawing, create a more realistic hand by adding wrinkles, a more believable skin tone and more scaled fingers. 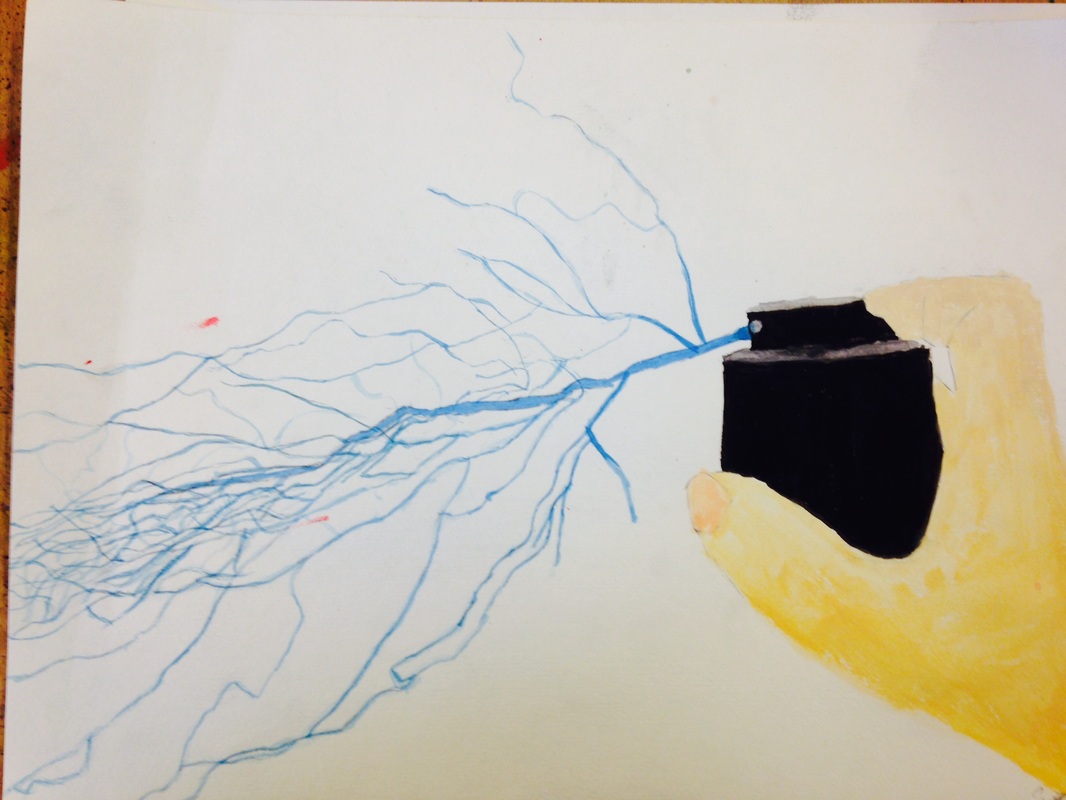 First Draft
Approaching my second draft I took many of my critique into consideration. I added shadows, dimension and physical details to my spray paint can, created a more color matched skin tone and using my own hand as a reference created a more visually stimulating hand with scaled fingers and a little more detail. I also used less paint to make it seem like the hand and can were reflecting the lightnings glow. The change in direction was to facilitate the tracing from the tracing paper to the canvas. After I finished this draft I went to my peers and mentor again for critique on how to improve the painting. Some of the advise I got was have cleaner outline marks, make a more realistic fingernail, focus on the transition of shades from the light of the lighting and to add more details to the hand. Taking these I approached my third draft. 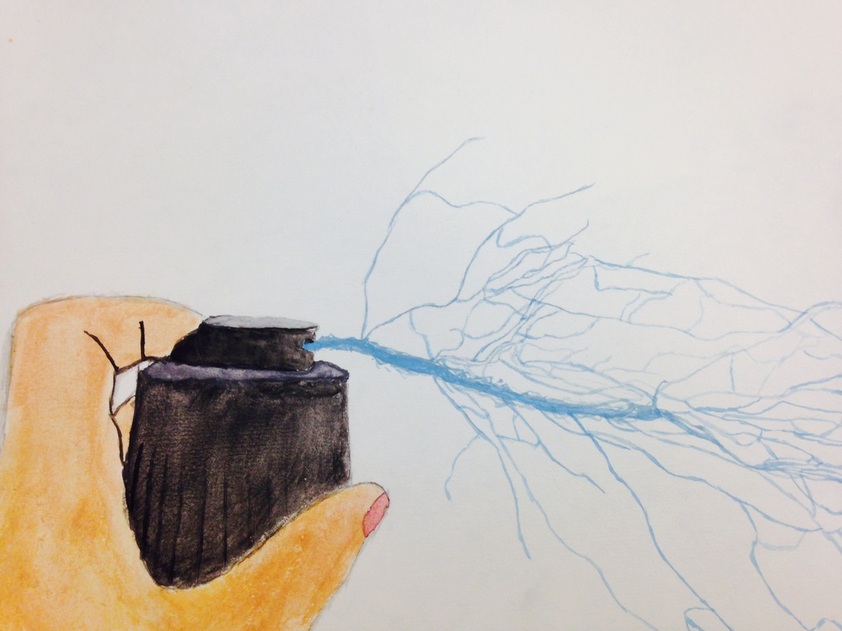 Second Draft
By using the improvement I made in draft two I was able to create a more visually appealing piece that shows by addition of physical details of each object dimension, realism where needed (the wrinkles of the hand and the depth showed where the other fingers appear) and the shades and contrast of light for the object by using less paint as I approached the lightning and showing a decline in the darkness of the paint as it moved further. While there is always room to improve I feel like the end result was a product I could be proud of and revisit to improve upon when I can. Some of the ways I could do this is improve the darkness of the can, make cleaner borders and improve the placement of where the lightning shoots out of the can. 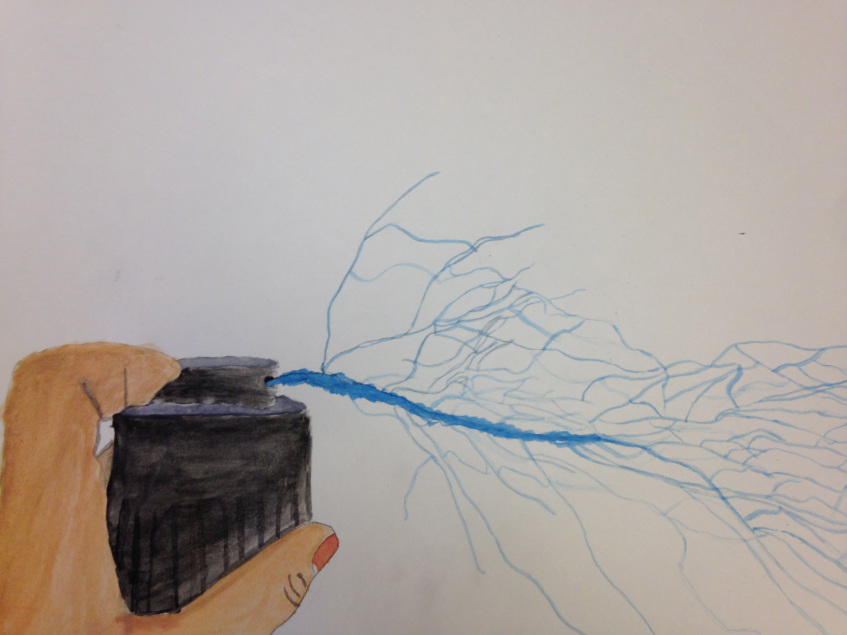 Third and Final Draft
Some of the things I take away from this project are the technique of the double tracing of tracing paper and canvas, I can use this in many future projects where we have to base the art on a picture. I can also use it in the combination of images to form a combination that can either just look esthetically pleasing, convey a message or change the meaning of one of the original images in the way propaganda does or more likely both. I also take away the evidence of how much drafts and critique can change and improve your work. I also learned a lot about shading and color mixing/matching, from using less paint and adding water to show different shade of a single color to mixing colors in a way you can match it to something in real life will help me fundamentally in my future painting and artworks.
Powered by