Menu
Feel free to contact me
There is good, there is bad and there is science. What would happen if you could made a superhero comic book character  but the only catch is you have to base it on an element? Obviously the answer is hell yeah! When I was given this task I wanted to create the best hero/villain I could possibly make based around the element of Argon. Thus Argos was born.

William was once a normal person. He used to be one of the leading chemist in the world. One day while doing an experiment with liquid Argon, the nature of the experiment is unknown but the record shows that he fell into a vat of liquid Argon. Trying to get out he took hold of an electricity current rod they were using in the tests, this provided no hold and he fell back in with the rod, this caused the Argon to become excited and began glowing with a powerful violet glow. Several minutes later a figure rose from the vat, This entity was a see through humanoid gas with glowing purple organs and veins. As it moved it slowly grew back its muscles and tissues until there was a radiant, purple, violent William. He just stood there levitating in place without saying a word. After a couple seconds he reached for his partner, released a powerful blue-green laser beam that left his partner as nothing. This caused William to go on a shock trauma induced rampage. He made several quick movements that caused lights to explode and release a dangerous amount of Argon gas that he seemingly controlled to suffocate the rest of the staff in the Lab. William was unstoppable and continued his killing spree out in the outside world. He was an incredible force that was killing everyone in sight until the hero known as seveN appeared and began to fight William. After several hours of disastrous fighting he was eventually brought down by seveN and a team of army officers. They were able to achieve this when seveN temporarily froze William with a blast of liquid nitrogen. With him frozen the soldiers began to bombard him with tasers and mercury tipped plastic bullets, this caused some sort of reaction that caused William to glow a bright, electric blue and caused him to break out of the ice, but collapsed blacked out. They then transported him to a closed, air free cell deep in the deserts of New Mexico.  He was given the codename Argos by the popular public as he was releasing Argon gas to kill thousands by way of suffocation and using many powers that resembled uses of Argon.

Argos is confined within a secret high security prison in an unknown location within the state of New Mexico, he arrived after going on a genocidal rampage after having a traumatizing accident with a vat of liquid Argon, this was the origin of his powers and also left him with insanity due to trauma. He has only said one sentence since waking up, “seveN will die.” He possesses the following powers: transportation by turning into a concentrated glowing purple gas that can move freely or move through lights, control of electric light, control of the composition of metals, absolute control of any form of the element Argon, can emit concentrated Argon gas, can absorb radioactive compounds and use them to his advantage, concentrated laser beam and a incredibly high intellectual level. He is seemingly invulnerable to everything except the combination of mercury and electricity, this causes him pain until he becomes unconscious. He wears a lower body suit that resembles that of a wetsuit, it is black with purple highlights. This “pants” were given to him upon arriving to the prison.

This character was based off the element of Argon. The element was discovered by Sir William Ramsay in Scotland around 1894. The word Argon comes from the Greek word Argos which means inactive, It was named this because it has eight valence electrons, because of this it is a very non-reactive element that doesn’t combine easily with others. Argon is also the most common isotope in the atmosphere because it is a direct byproduct of decaying potassium in the Earth’s crust. Even though it is the most common isotope it is still a very small part of the atmosphere if it were in abundance the density of the Argon gas would suffocate all living beings on the planet. Argon is also used in the industrial world in electric light bulbs, fluorescent tubes and lasers. 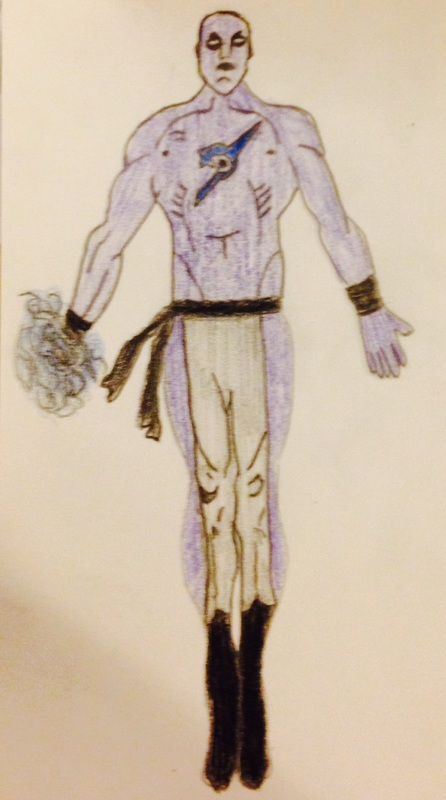